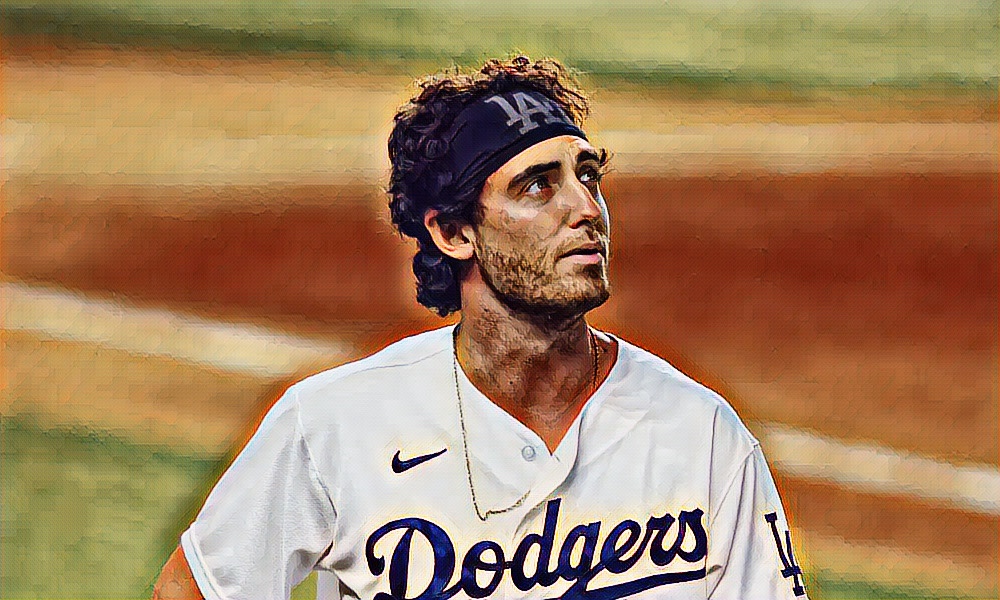 Bellinger has only mustered 34 plate appearances so far in 2021 after a long IL stint with a small fracture in his knee. Since coming back he’s gone 0-8 in the middle of the lineup with his only highlights being a walk before the Chris Taylor at bat of the year and a great catch in center showing his glove is still golden. So let’s take a deep dive look at the MVP sensation and try and project how his stats will look after game 162.

First off we need to guesstimate how many games Bellinger will play. With 54 already in the books, and Bellinger an everyday player when healthy, we’ll say he’s going to play about 100 more games this year. At about 4 at bats a game he’s looking at a solid 400 at bats ahead of him before playoffs.

Historically, Bellinger has a home run rate of just under 6%. That means that we can project Bellinger comfortably between 20 to 25 home runs this year.

It’s also hard to believe Bellinger keeps hitting a slash line anywhere near his current .138/.265/.241. His expected stats are only .116/.219/.183 so it hasn’t been too much bad luck. However, 2 of his 4 hits would be homers in Dodger Stadium but went for a single and triple instead.

He has had 4 different levels of production in his 4 seasons so far with OPS’s ranging from .789 to 1.035. It does make it much harder to predict where he’ll land this year, especially after career lows in 2020.

His career slashline currently sits at .271/.363/.542 for an OPS of .905. All of which sets up lofty expectations and projections for Cody. But we still recognize that he’s only outperformed those numbers in 2 of his 4 years so far. So let’s look at the concerning signs of why Cody may be heading for another down season.

First, his overall hard contact is very down in his first 7 games. (And yeah, it’s only been 7 games for anyone really panicking) His average exit velocity would be a career low at 87.3 MPH.

All in all his hard hit rate so far is almost half of his career normal sitting at a below league average 23.5%. And it’s probably because he’s whiffing at a higher rate than ever with a K% of 35.3.

His sprint speed is also down which we have to hope isn’t a lasting problem. Last season Bellinger was in the 91st percentile in sprint speed, but he’s currently down 2 MPH and now in the 49th percentile. If that’s a permanent effect of his knee injury (which we doubt) he’s officially down to a 4-tool player. Not that that is a major deal breaker in the modern game.

With all that being said, Bellinger just seems to need more time and at bats and shows some signs of maybe even improving his game.

His sweet spot % is the same as his ROY campaign. His walk rate is a career high at 14.7%. He’s seeing more pitches per at bat than ever before this season at about 4.2 per PA.

His BABIP is well below his career average at .235 compared to .296 which is a big sign of regression one way or the other. (Probably for the better). His ISO is also almost a third of his usual career rate. Another sign that Bellinger is either underperforming or heading in a bad direction.

But, we think Belli just needs more time. We think by the end of the season Belli will slash about .260/.375/.500. Throw in 20+ homers and his position in the lineup and he could easily score 80+ runs, 80+ RBI, and 10+ stolen bases if his speed does come back with conditioning and actual chances to run on the bases.

Basically, we say don’t panic. Bellinger has just finished a weeks worth of games after missing about 50. This slow start probably means he’s not heading towards his MVP level stuff this year, but we’d be very surprised if Bellinger doesn’t OPS above .800 by the end of the year with double digit homers and steals. Meanwhile, enjoy the gold glove level outfield of Bellinger and Betts until his bat wakes up.

by dodgerdynasty May 26, 2021
Advertisements