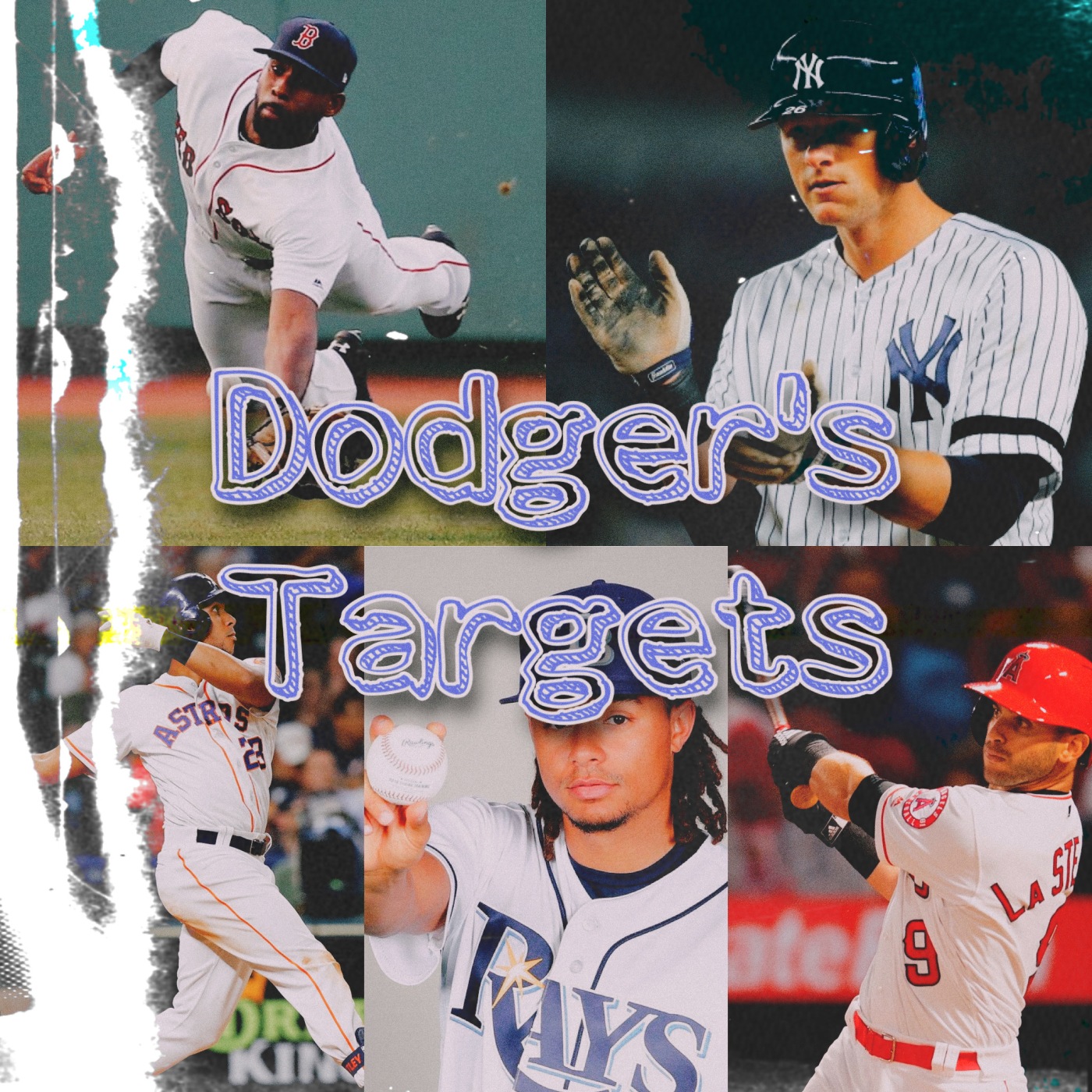 So the final question we have for the Dodger’s this offseason is who do they target in trades and in the hot stove market? The Dodger’s roster has a lot of versatility and turnover this year, making this less competitive offseason an outlet mall for Friedman.

The Dodgers need a 3rd baseman (or shortstop, or second…), relief pitching, and probably a left handed bat to replace Joc in the outfield. The biggest holes being left by Turner, Treinen, and Baez. Those 3 saw a significant percentage of playing time for the 2020 champs.

They don’t need starting pitching (not that that has ever stopped the Dodgers from a big signing), a catcher, a right handed outfielder, or a first baseman.

That means that the Dodgers will probably not be interested in the big 3 of Trevor Bauer (barring a huge 1 year contract), JT Realmuto, or George Springer.

This is a very top heavy free agent market, outside of relief pitching. The top player at just about every position is almost twice as valuable as the next guy. So with that being said, we have our top 5 most likely free agents that fit the Dodgers.

We ranked them on value and not how likely they are to join the Dodgers. We also did not include any Relief Pitchers as there are literally dozens of fits for the Dodgers.

(We will not be mentioning any Dodger free agents. Check out Post 4 of this series for that.)

As unlikely as this is (LeMahieu is arguably the #1 player this offseason), LeMahieu fits the Dodgers lineup well with his versatility.

He can play just about any position in the infield outside of Shortstop which is locked down by either Seager or Lux. But both of those players can theoretically move to 3rd and short making DJ the everyday second basemen and replacing Turner if he decides to move on.

LeMahieu is still only 32 years old, the same age Turner was when the Dodgers gave him a 4 year deal. And he’s probably the only right handed infielder in the market that could actually replace Turner’s value in the lineup if not more.

We see LeMahieu signing for anywhere from $15 to $25 million a year considering he’s probably the best bat in the market this offseason.

We see Brantley as a primary target for the Dodgers this offseason. Although, rumor has it he wants to stay in Houston.

But his primary position is left field as a left handed bat. And he’s been almost twice as valuable as Joc in his early 30s. He’s even a postseason stud.

So essentially, Brantley has only had one bad year in his 12 years of playing. Other than that, he’s been an iron man. And while he’s no longer a stud defensively, he has had positive WAR as an outfielder in 4 of his last 5 seasons. With Bellinger and Betts basically able to run a 2 man outfield, Adding Brantley to the mix would be just as good as with Joc.

Overall, we think Brantley may be the most underrated player this offseason. Exactly the type of player Friedman likes to target. And at 33 and the DH likely here to stay the Dodgers can remain competitive and possibly offer him a similar offer to Lemahieu.

We’d offer 4 years up to $50 million. But it’s very possible the market drives his price up. But considering his average WAR per year in his career is just over 2, we wouldn’t want to pay the premium $8 million per WAR on most likely a platoon player.

La Stella is another under the radar star for just about any lineup. But for the Dodgers, he could be the next best thing for replacing Turner at 3rd.

He’s another player who is consistently above average at hitting. And he does it with almost not power. He’s a high average type player who loves to put the ball in play. He is pretty much a .275/.350/.400 type hitter who almost never strikes out.

He is just an average defender at 3rd which takes away the appeal for the Dodgers. But he’s maybe the 3rd option as far as 3rd base and could also play second with Lux and Seager moving as well.

But here is the biggest reason the Dodgers may want him. He’s cheap. And at only 21 it’s possible the Dodgers offer him a 2 year, $6 to $10 million dollar contract and he takes it. Thus bridging the gap to the Dodger’s talented prospects coming up.

JBJ is interesting. He’s not much of a hitter (despite a run at DiMaggio’s 56 game hitting streak record a few years ago, but he is a defensive stud in the OF. He had 0.7 defensive WAR in 2020 alone. Over a full season that translates to almost a win and half on his defense alone.

He has familiarity with Betts which is good, he would only be the left handed option for Pollock for at least a couple years, and he has shown signs of life hitting last year.

It’s also worth noting that he’s only slightly better at hitting righties, but it does make the difference of being above average or below for him. (105 OPS+ against Righties, 88 against lefties)

Dodgers could offer him a 5 year, $50 million dollar deal with opt outs, team options, etc. and he may very well take it.

Ok, we know we said that the Dodgers don’t need starting pitching, but that’s almost what gives them the advantage with signing Archer. Someone Friedman has had his eyes on ever since leaving the Rays organization in a trade that has forever haunted the Pirates.

And as a fresh 32, Archer isn’t in a bad spot to take the best one year flyer offered to him. Considering he hasn’t pitched in a year, and hasn’t had an ERA under 4 since 2015, we doubt many teams will line up to pay Archer the big bucks he knows he’s capable of.

Since 2015 theres been a few noticeable declines in Archer’s peripheral stats. 1) His fastball velocity has decreased by 2 MPH since 2015. 2) His movement on his pitches has declined which has 3) lead to his hard contact rate going up by 5% since his stellar 2015.

His walk rate has mostly stayed steady. So has his strikeouts. His contact rate. His chase rate. And we will say, Archer’s FIP has been better than his ERA in 7 out of 8 seasons. Meaning consistent bad luck may have played a factor in Archer’s fall from the throne.

So we say, take a 1 year, $7 million dollar flyer on Archer. Get him over to driveline and see if you can tick that velocity and movement back up. Or at least find a way to bring down the home run rate and Archer could be the biggest bargain of the year.

Worst case scenario for the Dodgers is they blow a small percentage of their payroll on a guy who will be replaced with a $500,000 rookie. He turns into possible trade bait if he’s just not quite good enough for the Dodger’s rotation. Or maybe Archer could reinvent himself out of the bullpen.

No matter what. This seems like a match made in heaven. Friedman gets another crack at a Cy Young Capable Archer. And the Dodgers are one of the few teams in baseball who can afford to give a pitcher like this a chance due to their massive payroll and pitching depth.

Now for trades we aren’t going to go in to details in this article. Instead, we’ll just give the names of possible players the Dodgers may, or at least should be looking at.

Don’t forgot to join our list of dividend subscribers with your PayPal email right here.