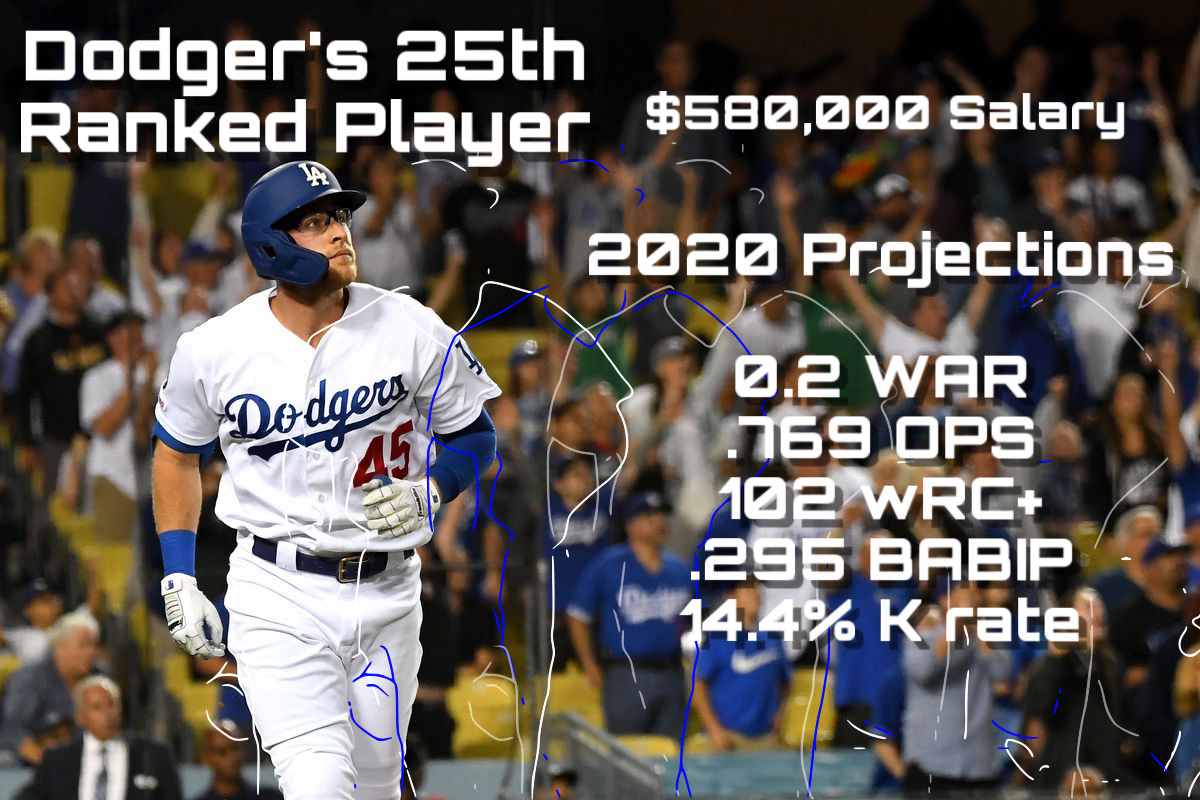 Matt Beaty. The latest of surprise players to make his way to LA. The one difference here was Beaty was actually drafted by the Dodgers with the 372nd pick of the 2015 draft. The same year as his fellow roster mates Buehler, Rios, and Sborz.

Let’s start with the simplest contact stat, contact rate. We’ll save you the trouble of guessing who’s the Dodger leader in contact rate, it’s Beaty. He finished the 2019 season with an 86.7%. If he qualified, that would’ve been good for the 9th best in the MLB.

How about the rest of the Dodgers? Verdugo had an 85.7%, Turner at 81.6%, and the MVP Belli at 80.6%. So while contact rate doesn’t make a good hitter, good hitters have high contact rates. So how does he compare to the rest of baseball in everything else?

He may not be an elite bat yet, but he has the makings. That exit velocity is the exact same as several players last year. They were Lorenzo Cain, Verdugo, Guerrero Jr., Arenado, Odor, and Eugenio Suarez. That hard hit rate is almost exactly the same as Francisco Lindor. That K% rate is tied for 11th best in MLB. Even the xBA is tied for 40th with Bogaerts. It’s right ahead of Acuna Jr. Above all, his Solid contact % is 7.4. Well separated from the MLB average of 5.6. It puts him in a group of hitters named Realmuto, Kepler, Chapman, Harper, Dozier, and McNeil. It’s clear that Beaty has the same thing that the best hitters across the league have. A good eye and coordination.

It seems that the more you pressure Beaty, the better the results. Now before we get into the stats, remember that everything is based on small sample sizes since Beaty has only played half a season at best.

So Why is Beaty Not There Yet?

So Beaty has the potential to be elite at the plate. He’s not especially fast, but he’s not slow. He’s in the 63rd percentile in speed and was 5 for 5 in SBs in 2019. His arm was one of his best qualities as a prospect, so what is it?

The most glaring issue is Beaty’s defense. Why he’s versatile enough to play the corners of the outfield and the infield, he’s not especially good at any position. However, it isn’t exactly fair to ask a player to improve on defense when they have to focus on 4. If we can give Beaty some consistency, this would hopefully improve.

And he is a good hitter with contact, but he’s not great yet. The damage only comes from the middle level of the plate. He needs to level out his swing is our guess. The same way Bellinger exploded after changing his stance to swing the bat as flat as possible through the strike zone.

So while making contact is a great indicator of a good hitter, great hitters no how to limit bad contact.

One thought on “Batt Meaty: The King of Contact”